Demand for composite pressure vessels for storage of natural gas and hydrogen is expected to increase substantially over the next decade as OEMs and governments look for ways to reduce vehicle emissions.
#feature #sourcebook #airbus 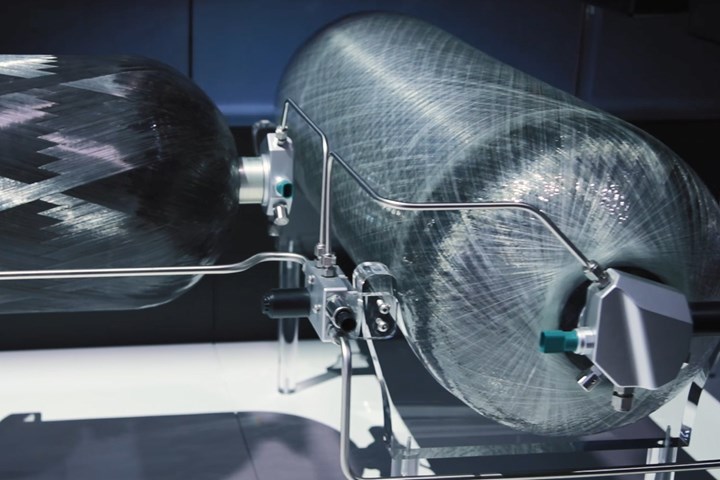 Hydrogen-powered passengers cars and commercial vehicles depend on carbon fiber pressure vessels to store the hydrogen. Shown here is a hydrogen
tank made by Faurecia for a Hyundai truck. Photo Credit: Faurecia

High-pressure gas storage vessels represent one of the biggest and fastest-growing markets for advanced composites, particularly for filament wound carbon fiber composites. Although they are used in self-contained breathing apparatuses and provide oxygen and gas storage on aerospace vehicles, the primary end-markets for composite-reinforced pressure vessels are bulk transportation — also called mobile pipeline — of compressed natural gas (CNG) products, and fuel storage in passenger cars, buses, and trucks with powertrains dependent on CNG and hydrogen alternatives to gasoline and diesel.

Pressure vessels are organized into one of five types:

Demand for alternative fuels is growing, in part, because the extraction of natural gas from shale reserves has contributed to lower prices in North America and parts of Europe. In addition, lawmakers, car buyers, and some automakers are looking to move away from gasoline as a fuel given its contribution to global warming. That said, the pandemic and global oil glut has driven the price of gasoline down in 2020, somewhat neutralizing the value proposition of natural gas.

In the United States, for example, the cost of natural gas fuels currently runs about 13% less than diesel and 3% less than gasoline per gasoline gallon equivalent (GGE). In Europe, however, increasingly stringent emissions regulations, including the EU Euro 6 Standard, which took effect in 2016, are making diesel-powered buses and commercial vehicles more expensive for operators. Impending regulations are improving the marketability not only of CNG but also of hydrogen — after a period of relative dormancy — for fuel-cell powered vehicles.

According to a Grandview Research report, global natural gas vehicle (NGV) sales in 2020 will be approximately 24.4 million units, driven by strong demand in Asia and Europe. By 2027, that number is expected to rise to 37.4 million units. CAGR during that 2020-2027 period is forecast to be 3.5%.

The rise of hydrogen

Although natural gas storage and transportation has been the historical focus of the composite pressure vessel supply chain, 2020 saw more attention paid to pressure vessels for hydrogen storage — for vehicles and aircraft.

Further, Hexagon Purus GmbH (Kassel, Germany), a subsidiary of Hexagon Composites (Alesund, Norway), reported in July that it has been awarded a contract for the design, development, qualification and production of high-performance Type IV composite pressure vessels to a new major aerospace customer for its launch vehicle.

Composite pressure vessels for hydrogen storage are important in the automotive industry for fuel cell electric vehicles (FCEV), which combine hydrogen with oxygen in an electrolytic reaction to generate energy. The byproduct of this process is water, therefore FCEVs are emissions-free. FCEV technology is being applied in passenger cars as well as commercial vehicles, and their emissions-free operation makes them a big target for governments looking to mitigate climate change. Global Market Insights published a report in September 2020 that estimates the global FCEV market passed US $1 billion in value in 2019, and should reach US $14 billion by 2026. CAGR over that period will be 38%. Deloitte also has a good summary and analysis of FCEV technology.

The challenge, as with any vehicle powered by non-gasoline fuels, is one of infrastructure. In the U.S., relative to land area, there is only a handful of hydrogen refueling stations (with most of those in California), and slightly more in Europe, Japan, and South Korea. Refueling stations notwithstanding, anyone in the market for an FCEV has three options: the Toyota Mirai, the Hyundai Nexo, and the Honda Clarity. They have ranges of 400, 380, and 360 miles, respectively, and cost about US $68,000 (which includes a $15,000 fuel credit). 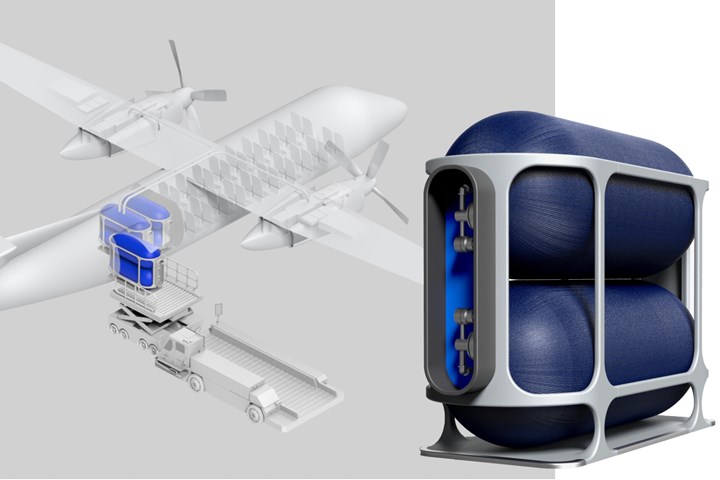 In aerospace, interest in hydrogen spiked suddenly in 2020, triggered by the French government, which tied its COVID-19 relief for Airbus to a demand that the planemaker develop and bring to market by 2035 a hydrogen-powered commercial aircraft. Airbus had, pre-pandemic, been assessing hydrogen as a fuel source, but targeted 2050 for entry into service. In any case, Airbus launched in summer 2020 its ZEROe project, designed to accelerate the development of combusted hydrogen as an aircraft fuel.

It remains to be seen what role composites will play in hydrogen storage in a large commercial aircraft. The Airbus ZEROe concepts envision that the back third of an aircraft would be reserved for storage of hydrogen in liquid form, which requires cryogenic temperature control. One company working on developing hydrogen delivery and storage for aircraft is Universal Hydrogen (Los Angeles, Calif., U.S.). Co-founded in 2020 by Paul Eremenko, ex-CTO for Airbus SE (Leiden, Netherlands) and United Technologies Corp. (Farmington, Conn., U.S.), Universal Hydrogen’s goal is to help transition to hydrogen-powered aviation by providing a hydrogen fueling infrastructure. One key component is its fuel module comprising twin H2 storage tanks in a carbon fiber-reinforced polymer (CFRP) frame. “We will supply the modules to site as needed, so there’s no need for hydrogen storage infrastructure,” explains Universal Hydrogen CTO J.P. Clarke. “The modules are simply loaded into the plane like a battery or galley supplies.” Read more about Universal Hydrogen and its technology in Ginger Gardiner’s report, “Carbon fiber in pressure vessels for hydrogen.”

We appreciate your request.
Our representative will contact you within 2 business days.

Thank you for your subscription!
Subscribe to Newsletter
Sing up with your email address to receive news and updates